United Airlines will announce new routes tomorrow (we have clues) Updated 14 October 2021: The routes have now been announced – follow this link for details

Early yesterday, United Airlines posted a cryptic teaser on Instagram which suggested that the airline would be making some kind of announcement at 08:00 ET today. Well, the appointed hour has now passed and we now know that the cryptic message was just a lead-in to a new video (just posted) that contains clues to help us all guess where United plans to fly to before the official announcement tomorrow at 08:00 ET.

The video, which you’ll find on the airline’s Twitter account (here), runs for a minute and depicts two people getting their carry-on cases mixed up. I’ve watched it a couple of times and think that I’ve spotted a few things that may suggest where the airline plans to fly to and from. I’m sure that there are a number of clues that I’ve failed to pick up on and some or all of my guesses are probably way out, but I really don’t have any more time to keep rewatching United’s video and with all being revealed in under 24 hours’ time, I’m happy to leave my guesses where they are.

Did you spot any other clues? What do you think United’s new routes and destinations will be? 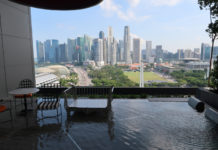