The 777-300ER aircraft that Singapore Airlines operated between Singapore and Sydney for this particular flight offered 48 Business Class seats spread across a 12-seat mini-cabin and a 36-seat main cabin.

The seats are set out in a 1-2-1 layout, so all passengers have direct access to one of the aircraft’s two aisles.

All the Business Class seats face directly forwards so most of the single seats are identical, as are most of the seat pairs. The only real difference is to be found in the bulkhead seats which all have considerably more legroom than any of the other seats in the cabin – these are the seats to choose if you can.

The center seats would work well for couples traveling together as, unlike in a lot of the reverse herringbone seat layouts you’ll find in other airlines’ Business Class cabins, their design doesn’t block the view between the seats.

For those times when the two people occupying the center seats aren’t traveling together, there’s a center partition which can be raised to offer a good deal of privacy.

I was seated in 12K (a regular single seat) and it offered more personal space around me than any other Business Class seat I’ve tried out – it was huge!

The age of the seat, however, was given away by the rather old-fashioned seat controls…

…and the presence of an HDMI socket and an iPod input alongside the universal power outlet and two USB ports.

These seats may be big but they’re certainly not new!

Above the seats are two lights (controlled by switches next to the seat) but no personal air nozzles – for temperature control passengers are at the mercy of the cabin crew.

Additional personal lighting is also built into the shell of the seat.

From a storage standpoint, the seat area doesn’t score well as there’s very little free space for a passenger’s electronic devices or anything of size that a passenger may want easy access to.

To one side of the seat there’s an open storage area which clearly states that it’s not to be used for storage during taxi, take-off, and landing and, with every chance that things would come flying out of it during turbulence, it’s not an ideal place to keep anything breakable or valuable (although, given the lack of alternatives, that’s where I ended up storing my MacBook).

Just ahead of this cubby is a small storage “hole” built into the seats’ under-window ledge…but that comes pre-filled with the airline’s headphones.

Even if you were to find somewhere else to keep the headphones, the space isn’t really big enough to store more than a few small items.

The only other storage area that gives a passenger easy access to their items is a small cubby built into the seat in front and to the right (in this seat’s case) of the IFE screen.

This is a more than adequate place to store things like a mobile phone and passport, but no one is going to be storing anything larger in there.

…but that’s still not an ideal place to store one’s laptop or tablet if you want to be able to get at it easily throughout the flight (it becomes an inaccessible area when the seat is reclined or in lie-flat mode).

Storage isn’t the only area in which this seat scores poorly.

As a place to sit the chair is comfortable and there can be no complaints about the personal space around each passenger…but in most other positions the seat isn’t a very relaxing place to be.

… but unlike with the newer seats, the 777’s version makes it hard to get comfortable when you’re partially reclined (and trying to watch the inflight entertainment, for example) and I couldn’t find a comfortable lie-flat sleeping position either.

I’d like to say that this is where the annoyances with the Singapore Airlines 777 Business Class seat end but there’s one last little niggle that the seats throw up.

…it’s incredibly easy to accidentally deploy the tray table when you rest your arm on one side of the seat (apparently I’m a slow learner as I must have done this at least 5 or 6 times during the flight!).

I don’t say this very often when reviewing Business Class cabins, but I really didn’t like this seat at all – it had way too many drawbacks and far too few obvious advantages.

Singapore Airlines is different to a lot of airlines in that it doesn’t offer its Business Class flyers and amenity kit.

Socks, slippers and an eye mask were all waiting for me at my seat when I boarded…

…while all the other items normally found in an airline’s Business Class amenity kit are on offer in the aircraft’s lavatories.

…but as I couldn’t get the login screen to open in Safari, Chrome or Firefox I can’t tell you how well the free allowance worked.

…but the triple-jack input that these headphones come with mean that passengers’ personal headphones (which generally only come with a single jack) will only offer up mono sound when watching the aircraft’s entertainment.

It for occasions like this that I recommend travelers equip themselves with cheap dual-jack adapters from Amazon which will allow you to enjoy stereo sound on aircraft like this.

…but they’re not touchscreens so passengers need to use the controller built into the side wall to select the programs they wish to view.

As far as the available entertainment goes, this 777-300ER’s selection did not appear to be as good as that offered by the newer systems on the airline’s A380s although there were still a good number of up to date movies and TV shows on offer.

Note: I find myself saying this a lot but it’s worth repeating – no one should be relying on an airline for their inflight entertainment. It’s remarkably easy to download your favorite movies and shows to a variety of mobile devices and with the use of a headphone splitter jack you don’t even need to have a device each.

It took less than 5 minutes after we boarded before a flight attendant offered us a choice of juices as a pre-departure beverage (tomato, orange, or apple) – no alcoholic drinks were offered.

After a very impressive 15 minute boarding time, the crew came around with a selection of newspapers and steaming hot towels.

As the aircraft pushed back just 20 minutes after boarding had been called, a flight attendant took orders for drinks to be served after the aircraft leveled out.

There was no major delay at Changi airport, so it wasn’t long before we were airborne and, within, 10 minutes of take-off, a glass of champagne swiftly followed by a bowl of warm nuts were delivered to my seat.

It wasn’t long after drinks had been served that the cabin lights were dimmed a little for those not planning to eat and, just 15 minutes later, my table was set for lunch.

Lunch was the following:

A selection of bread offered from a bread basket (I chose the garlic bread).

A bowl of Japanese Style Shoyu Ramen (noodles in soya sauce flavored pork broth served with pork belly, half-boiled egg, beansprouts, and spring onion) which I had selected ahead of the flight through Singapore Airlines’ excellent “book the cook” service.

I declined dessert, the selection of cheeses and a variety of fresh fruit.

The meal was poor.

The crab salad was acceptable but the garlic bread was disappointingly cold (there’s no excuse for that) and the ramen was incredibly salty – it was edible (just) but it wasn’t good.

A little over 90 minutes before landing the crew served a “refreshment” course which, once again, I had selected via the airline’s “book the cook” service.

This was “fried hokkien mee” which consists of noodles cooked with prawns, squid, and pork.

The picture doesn’t do the dish justice as it was actually pretty good – it wasn’t too oily, and it had plenty of flavor.

Sadly, this was just a brief highlight in an otherwise disappointing set of dining experiences on this flight, and it was rounded off by a truly terrible cup of brewed coffee which couldn’t have been more bitter had it been served with a lemon in it.

Having connected on to this flight from a very good Singapore Airlines A380 Business Class experience, the deficiencies of the seats and the food on this flight were probably highlighted a bit more than they may otherwise have been…but that doesn’t take away from the fact that this was a pretty poor all-around experience.

Clearly I didn’t think I’d be writing this sentence when I first booked this flight, but this was one of the worst Business Class flights I’ve had in the last few years – it failed on multiple levels and that’s not something I expect from Singapore Airlines. 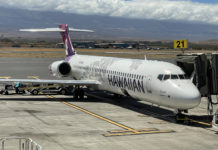