Accenture recently published a mini-interview with the CEO of IHG Hotels & Resorts, Keith Barr, and while most of the short video doesn’t directly relate to the miles and points world, a 40-second segment within it gives us a brief insight into what IHG thinks it needs to do to keep customers engaged with its loyalty program.

I’ve said this many times before but it’s worth repeating. As a loyalty program, IHG Rewards is bad. Actually, that may be a bit unfair to some of the other bad programs out there. IHG Rewards is very bad.

A quick look at the IHG Rewards benefits chart shows that loyalty to the program isn’t particularly rewarding.

Even if you reach the dizzying heights of “Spire Elite” status, you’re not entitled to a complimentary breakfast, and when you read the small print surrounding room upgrades, it becomes obvious that they’re far from guaranteed, they’re likely to be unimpressive, that suites aren’t part of the deal, and that hotels have so much leeway that it’s easy for them to deal with guests in whatever way they feel is appropriate (i.e. is best for the hotel and not necessarily the guest).

“Platinum Elite and Spire Elite Members will be offered a complimentary upgrade, as determined by the hotel, which might include rooms on higher floors, corner rooms, newly renovated rooms, or rooms with preferred views. The upgrade will be offered at time of check-in, subject to and based on availability, and will only apply to the Member’s personal guest room. The hotel is not required to upgrade Members to suites or specialty rooms.”

Marriott Bonvoy, Hilton Honors, and the World of Hyatt all have their weak points but they’re all considerably more rewarding than IHG Rewards.

Add to all of that the fact that IHG loves a no-notice devaluation and that its points depreciate significantly year on year, and you start to get the picture of a program that doesn’t appear to value loyalty or have much respect for its members (IHG’s history of failing to communicate with its Rewards members is legendary).

With all of that in mind, one would hope that IHG may be having some discussions in the background that relate to making its Rewards program a little more competitive with the likes of Hilton Honors and Marriott Bonvoy, and that it’s looking at ways to encourage more loyalty from its guests.

Well, if those discussions are happening they’re being kept very quiet because Accenture’s mini-interview with Keith Barr appears to show that IHG believes that its Reards program would best be improved by giving members more ways to use their points.

What Keith Barr had to say

In the q&a with Accenture, the CEO of IHG was asked the following question:

“How is IHG rethinking loyalty coming out of the pandemic?”

This was the reply (I’ve done my best to reproduce what he said word for word so if some sentences don’t make a lot of sense, blame Keith Barr!):

“It’s about expanding your view of what a loyalty program can do. It’s about earning points to go redeem for hotel stays or for products but it’s also talking about what are the other things that customers want [as] experiences and so understanding how do you enhance your loyalty program experientially so on other stay occasions or other occasions, customers are staying in your ecosystem for a loyalty program and then being able to redeem those points maybe not for a stay in one of your hotels but for another experience or something that’s an adjacency too, and so effectively, you enhance your system of loyalty”

You can see the video below (2.43) and the comments reproduced above start at around 1.07.

…but with the possible exception of the Ambassador Membership option, all of the above offer terrible redemption rates (they often value IHG points at around 0.2 cents each).

This makes it odd to hear the IHG CEO saying that he thinks that what will improve IHG Rewards going forward is for members to be given more ways in which to get poor value for money out of their Rewards points.

I’m assuming that the new ways of redeeming points that IHG Rewards is considering will involve the program partnering with “experience providers” (similar to how Hyatt partners with Lindblad Expeditions or how Marriott offers “Bonvoy Moments”) and possibly with other travel businesses like car rental companies, but if IHG thinks that this will drive more engagement and loyalty and if thinks that this will be seen as a genuine enhancement, it’s going to be very disappointed.

No one has ever said that they would book more nights with a hotel chain if only they could use their points to go watch an NFL game, a concert at the Garden, book a sunset sail, or use those points to rent a car.

Does IHG really not get this?

If IHG genuinely wants to enhance the Rewards program and to get more people engaged (become more “loyal”), it needs to stop devaluing year after year, it needs to start communicating with its members effectively, and it needs to address the fact that in exchange for “loyalty” it offers considerably fewer benefits than any of its closest competitors.

This isn’t rocket science. People will soon start booking more stays with IHG, handing over more money, and being more engaged with the Rewards program if they can see that more stays will lead to:

Suddenly being able to use IHG Rewards points for anything other than good hotel stays isn’t going to enhance the Rewards program and isn’t going to move the loyalty needle one little bit, so I don’t understand what Keith Barr is trying to do.

Is he actually so clueless that he really doesn’t know what is needed to keep people engaged with IHG Rewards and to drive more loyalty to IHG? That seems unlikely as he’s clearly a very successful person, so what is he up to? What is IHG thinking?

Is this simply all about IHG trying to cash in on the less well-informed who will buy points at 0.5 cents each and end up redeeming them at a lower value than that? I hope not, but that’s what it sounds like.

Related Reading: IHG Rewards: How To Deal With The Problem Child Of Loyalty Programs

In a mini-interview (q&a) published by Accenture, IHG CEO Keith Barr has suggested that if IHG offers its Rewards members more ways to use their points, that will be seen as an enhancement of the program and that this will lead to customers being more engaged with the IHG Rewards ecosystem and in turn, drive loyalty to the brand.

Apparently, the simple idea of driving more engagement and loyalty by making IHG Rewards at least as rewarding as the programs offered by its closest competitors hasn’t occurred to anyone at IHG.

I can’t say that I’m surprised, but I am a little disappointed. 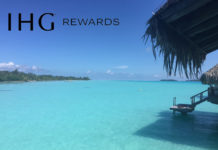 Odd: Are IHG free night certificates a little better than I...

How to combine an IHG credit card & an IHG points...