American Airlines has today announced that it will be fitting new Business Class and Premium Economy seats on aircraft that it expects to be delivered in 2024 and that select existing aircraft will be getting new premium cabins too.

American Airlines is set to start taking delivery of more long-haul Dreamliners and its all-new A321XLSs in 2024 and the airline has now confirmed that both aircraft types will feature new “Flagship Suite seats” and new Premium Economy seats.

“Flagship Suite® seats will offer customers a private premium experience with a privacy door, a chaise lounge seating option and more personal storage space. Customers will enjoy tailored luxury in their private retreat in the sky in American’s premium cabin.”

The new 787-9 Dreamliners that will begin to be added to the American Airlines fleet in 2024 will feature the airline’s latest Business Class cabin with new “Flagship Suite seats” and a new Premium Economy cabin.

Also, not only will the new Dreamliners offer new premium cabins, but they will also offer customers more premium seating overall.

As things stand, American’s existing 787-9 Dreamliners offer 30 seats in Business Class and 21 seats in the Premium Economy cabin, but those numbers are set to rise to 51 and 32 respectively in the aircraft being delivered in 2024.

2024 will see American Airlines start taking delivery of its first A3231XLR aircraft which are expected to be deployed (mostly) on the airline’s shorter (and possibly less premium-heavy) transatlantic routes.

Following today’s announcement, we now know that these A321XLR aircraft will offer 20 new Flagship Suites in the Business Class cabin (possibly a slightly different Flagship Suite to the one that will be installed on the new Dreamliners if the images are anything to go by)…

…and a 12-seat Premium Economy cabin:

Existing aircraft will be refreshed

It won’t be just the new arrivals that get the shiny new seat – some of American’s existing aircraft will be getting makeovers too.

The 20 Boeing 777-300ER aircraft that American Airlines currently operates will all be getting new Flagship Suites starting in late 2024 (presumably these will be the same as or very similar to the suites on the new Dreamliners) and they will see the seat count in their Business Class cabin rise from 52 to 70.

Confusingly, however, the airline has also said that it will “continue to offer lie-flat seats on its transcontinental routes departing New York and Boston” which would suggest that either a very small subset of A321Ts will remain as they are today (this seems highly unlikely) or that American Airlines will be using a different aircraft (possibly the new A321XLRs?) to operate its most premium domestic routes. I’ll update this post when American’s plans become clearer.

Today, American Airlines has announced two new Business Class suites and a new Premium Economy seat that will debut on the 787-9 Dreamliners and A321XLRs that will be delivered in 2024. The airline has also announced that its new widebody aircraft will offer larger premium cabins than their current day counterparts and that when its existing 777s are refitted with the new seats, their premium cabins will be increasing in size too.

Southwest just made it a lot easier to earn elite status... 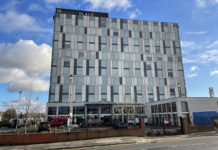 Hyatt is losing one of its smaller “London” properties I’m not “done with Bonvoy” but my Marriott strategy has definitely... Delta is refreshing its Premium Economy dining service and amenities