We’ve had a lot of news from United Airlines in the past few weeks and between the new flights, new routes and route reboots we heard about a month ago and the 22 daily flights that the airline says it will operate to London next year, I failed to pick up on the fact that I hadn’t seen United give more than a vague update on the longest route that it served before the pandemic – the route between San Francisco and Singapore.

Back in the middle of October and as Singapore was starting to open up its Vaccinated Travel Lanes, the unofficial word out of United was that it planned to get its San Francisco – Singapore service back up and running in January 2022 but that it hoped that it may be able to bring that forward to December 2021.

I remember checking ExpertFlyer at the time and not finding the San Francisco – Singapore route scheduled, and I then promptly forgot all about the route until I saw this tweet from United Airlines: 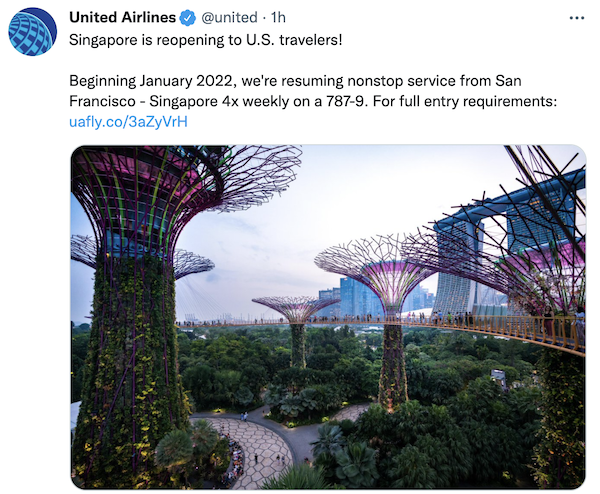 Apparently, the “hope” to reboot this route in December was no more than exactly that – hope – but it’s great to see United on its way back to Singapore and it’s great to be able to see the route in the schedules. Here’s what it looks like:

This route will restart on 4 January 2022 and as the tweet confirmed, it will be operated by a United Airlines 787-9 Dreamliner.

Unfortunately, the Dreamliner that United has scheduled to operate this route (at the time of writing) isn’t a refurbished aircraft, so Business Class passengers will have to make do with the cabin and seats you see below on their journey across the Pacific.

Worse yet, this aircraft doesn’t have a Premium Economy cabin so anyone not booking a Business Class fare will have to make do with Economy Plus seating or standard Economy Class seating for the 17+ hour flight.

Unfortunately – here comes more bad news – both the Economy Plus and standard Economy seats are only a little over 17″ wide so they’re probably going to feel tight when you first sit down and they’ll probably feel unbearably tight by the time you’ve spent the best part of a day sitting in them.

It would take a pretty big emergency to get me to sit in those seats for a flight of this distance.

The good news here is that United Airlines is set to reboot its San Francisco – Singapore route from 4 January 2022. The less good news is that the Dreamliner set to operate this route doesn’t have the United’s Polaris Business Class seats, doesn’t have a Premium Economy cabin, and offers Economy Class seats that are only a little over 17″ wide.

It’s great to see United return to Singapore, but I really wish it would do it with a refurbished aircraft.