The World Of Hyatt Devaluation Announcement Actually Made Me Happy UPDATE 13 March 2020: Hyatt has postponed the introduction of peak and off-peak seasons to 2021

Ok, clearly I’m never usually happy, delighted, or ecstatic when a loyalty program puts through a change that effectively devalues its offering but, in the case of the recent changes we saw Hyatt announce to the World of Hyatt award chart, my overall feelings were those of relief and, yes, happiness.

How Is Hyatt Devaluing Its Award Chart?

Hyatt has announced that it will be going down a similar path to Marriott Bonvoy and introducing peak, standard, and off-peak award pricing from March 2020. The Points & Cash Awards are getting the same treatment too…

…as is the Regency/Grand award chart: I’m not going into detail about these last few changes as, for the purposes of this post, they’re not particularly important.

Note: We also saw a devaluation to Points & Cash awards in late 2018 but what I’m focusing on here is the award chart for nights paid for entirely with points.

In January it will have been 6 years since the main Hyatt award chart last took a big hit and in loyalty program terms that’s an age ago.

As programs like IHG Rewards and Marriott Bonvoy (previously Marriott Rewards) have devalued their award charts year on year (and to significant degrees), Hyatt has mostly left its award chart alone and a devaluation/correction/major change has been long overdue.

If what Hyatt has recently announced is the full extent of the devaluation (and it appears that it is) then we (World of Hyatt members) have got off lightly.

Yes, we don’t yet know exactly what the off-peak/standard/peak spread will look like but Hyatt has indicated that we shouldn’t expect seismic changes and, for the time being, I see no reason to question that.

The worst-case scenario here is that World of Hyatt members will have to pay 5,000 points/night more for the property of their choice…and that’s only the case for Category 7 and 8 properties and only if those properties are being booked in peak season.

As someone who has been expecting (and dreading) a Hyatt award chart devaluation for at least 2 years, this a devaluation I’m happy to live with.

Amusingly, I noticed that one commenter on One Mile At A Time called those of us who are ok with this devaluation “lemmings” and called time on the “golden age of travel hacking”…but that just displays a fundamental lack of understanding of how real life works.

Since the last major award chart devaluation, we’ve seen Hyatt points become a lot easier to earn through new Chase Ultimate Rewards credit cards (like the Chase Sapphire Reserve® Card and the Chase Freedom Unlimited® credit card), the Chase World of Hyatt credit card and through the increased number of bonus point earning opportunities that Hyatt has been offering. Something had to give. It’s called inflation.

Yes, it’s not fun to have to pay more points for an award night – no one wants that – but considering just how bad this Hyatt devaluation could have been, the changes that are on the way are just about as benign as we could have reasonably hoped for…and that makes me happy. 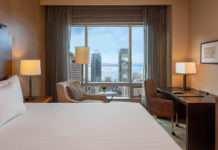 Hyatt’s award costs are going up tomorrow – book now to... Get 20% back on select award bookings with the World of...