IHG announced the purchase of Six Senses Hotels Resorts for $300m in February 2019 and IHG Rewards members shave been waiting patiently ever since to be given a chance to use their points to book these luxurious properties. Now, that wait is over (at least in part) because 6 of the Six Senses properties are now showing award night availability on IHG’s website.

As Katie Genter has reported on TPG, 6 of the Six Senses properties are now bookable with points on IHG.com as part of a phased integration of the properties into IHG’s loyalty program.

The 6 properties are these:

I’ve had a quick look at the cost of an award stay at each of the properties for the middle of January 2022 (I checked that far out to make sure that all the properties would be open) and some of the results were surprising.

Alphabetically, the Six Senses Botanique came first on my list and it also threw up the biggest surprise. While the cash rates being charged in the middle of January 2022 were remarkably low (for Six Senses)…

…the cost of an award was astronomical:

Yes, the points cost that you see above is for a 1-night stay which means that anyone using IHG Rewards points to book this particular night would be getting just 0.21 cents of value out of each point. That’s a terrible rate of return.

An IHG Rewards member using points to book this particular 1-night stay would be getting 0.92 cents of value out of each point used and as IHG frequently sells its points for almost half of that (0.5 cents each), that looks like it could be a pretty good place to redeem some points.

The Six Senses Laamu, Maldives is a property that will interest a lot of IHG Rewards fans as an entry-level room here is a Lagoon Water Villa that measures 1,160 sq ft. On the dates that I selected at random (a 2-night stay was needed to get availability to show), the nightly cash rate was over $1,500 (including all taxes and fees)…

…while the same villa on the same night could be booked for 100,000 points:

Booking this room with points would see an IHG Rewards member getting an incredible 1.53 cents of value out of every point utilized. An award booking at this property may cost an incredible number of points but during times like this (peak season), the value on offer can’t be ignored.

When I checked the nightly rate at the Six Senses Ninh Van Bay in Vietnam, the IHG website offered me a room for $1,097.25:

The same room on the same night was also bookable for just 75,000 points:

75,000 points in exchange for a room costing almost $1,100 would see an IHG rewards member getting 1.46 cents of value out of each point utilized and just like the return on offer at the Six Senses in the Maldives, that’s very impressive.

The Six Senses Uluwatu, Bali, Indonesia is a property that interests me quite a bit as I’ve never visited Balia and I made a mental note back in February 2019 (when IHG bought Six Senses) to check this property out when it became bookable with points. Well, that day has now come and on the night of 12 January 2022, the cash rate at the property is $722.37.

The same room on the same date is also bookable for just 60,000 IHG Rewards Points:

That’s a rate of return of almost exactly 1.2 cents per point.

The same reservation can be made with 110,000 points (the second-highest award cost in this post)…

…which would see an IHG Reward member getting 1.18 cents of value out of every point used and I doubt anyone would complain if that’s the redemption rate they managed to lock-in.

6 of IHG Six Senses properties are now bookable using IHG Rewards points and based on my brief searches it looks as if some of these properties will offer members a fantastic return on their points.

The Six Senses Botanique appears to be an outlier (for now) as you would have to be swimming in IHG Rewards points to be able to rationalize paying over 235,000 points per night for a room costing $500, but the rest look like they have great potential. I just wonder how long IHG will allow us to book properties costing in excess of $1,000 per night for 100,000 points. 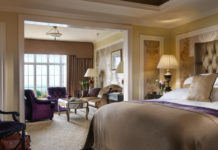