Remember: You can earn Avios when you fly with United Airlines Generally speaking, it’s usually pretty simple to figure out which airline loyalty programs you can credit your flights to without resorting to an in-depth Google search because most major airlines belong to one of the three global alliances (Star Alliance, oneworld, and SkyTeam). Sometimes, however, there’s an option that is less than obvious and as in the case of the option I’ll discuss in this post, it can be a very useful option to know about.

United Airlines is a prominent member of the Star Alliance so it will come as no shock to most readers that flights booked with United can be credited to loyalty programs such as KrisFlyer (Singapore Airlines), Miles & More (Lufthansa Group), and Aeroplan (Air Canada) as well as to United’s own MileagePlus program. It may, however, be a little surprising to find out that United Airlines flights can also be used to earn Avios – a major currency used by airlines in the oneworld alliance.

The ability for travelers to earn Avios for flights booked through United Airlines is a result of a long-standing relationship that United has with Aer Lingus.

Historically, however, Aer Lingus has always had an eclectic mix of partner airlines that wasn’t really dictated by any of the major alliances and if you take a look at the airline’s list of partners today, you’ll see that the eclectic nature of that list is still very much in evidence.

The key to this eclectic mix remaining in place appears to be the fact that even though Aer Lingus is part of IAG (and therefore a sister airline to oneworld airlines British Airways & Iberia), it is still not part of the oneworld alliance and that has left the door open for it to keep its partnership with United Airlines.

The number of Avios a traveler will earn when flying with United is dictated by the fare class that has been booked and the distance of the flight(s) being taken and is summarised by this Aer Lingus earnings chart: The earning rate for Business Class flights (100% of the distance traveled) isn’t exactly exciting, but travelers booked into Economy Class may find themselves earning more Avios when flying United Airlines (25% – 75% of the distance flown) than they earn when flying with an airline like British Airways.

When this can be useful

If you’re already a heavy United Airlines flyer (or a frequent flyer with another Star Alliance Airline) this may not be a particularly useful option to have, but I can think of at least three scenarios in which crediting United Airlines flights to Aer Club can make a lot of sense.

For people who fly frequently with United Airlines, the obvious place to credit their flights is United’s MileagePlus program. For travelers who don’t travel frequently with United but enjoy flying with other Star Alliance airlines, programs like KrisFlyer and Aeroplan will make more sense. For everyone else, however, crediting a rare United Airlines booking to a Star Alliance loyalty program will probably make little sense because that will just leave them with a small balance of points/miles that are unlikely to ever get used.

For oneworld flyers, Avios are an obvious currency to collect (given the chance) but considering how economically Avios can be used for short-haul bookings and how few Avios are often needed to book some of these shorter flights, it’s a currency that can be useful even if you’re not collecting it in the tens of thousands. Moreover, even if you don’t collect enough Avios for an award booking during a rare trip with United, an Avios balance can be topped up from Amex Membership Rewards, from Chase Ultimate Rewards, from Capital One, or, indirectly, from Citi’s ThankYou program, and you probably won’t need much of a top-up to get you enough Avios for a worthwhile redemption.

Avios is a currency that gets a lot of negative press (justifiably) because of the high surcharges that often come with long-haul redemptions, but it’s also a currency that can be incredibly useful when it comes to saving money on short-haul flights.

Within Europe, using Avios to book BA’s “Reward Flight Saver” redemptions (which come with relatively low surcharges) can be a big money saver during peak periods while for those of us based in the United States, the ability to book American Airlines/Alaska Airlines one-way fares between the West Coast and Hawaii from 13,000 Avios (via BA) and the ability to use Avios to book roundtrip American Airlines Economy Class flights on some of the shorter domestic routes from just 11,000 Avios (via Iberia) can be invaluable.

It doesn’t matter who your primary carrier is or even if you never fly with oneworld airlines, having a reasonable number of Avios on hand to save on short-haul bookings should be part of everyone’s miles and points strategy, and crediting a United Airlines flight to Aer Club can be a good way to top up a balance.

United Airlines Miles (or any Star Alliance currency) is almost completely useless in small numbers if you’re based in the UK (you’ll struggle to find a way to use them) so you may as well earn a currency that you can use. That currency is Avios.

In the UK, Avios can now be converted to Nectar points at a relatively good rate and Nectar Points can be used to pay for shopping at Sainsbury’s. That makes Avios the most useful currency for you to earn even if you never set foot on an aircraft again.

United Airlines flights may not be one of the more obvious ways to earn Avios but the option is there if you credit the flights to the Aer Lingus Aer Club program. Thanks to the fact that Avios earned in Aer Club can be combined with Avios held in BA’s Executive Club and/or the Iberia Plus program, and the fact that Avios can be incredibly useful when it comes to saving cash on short-haul flights, this is an option everyone should be keeping in mind when next deciding where to credit a rare United Airlines trip. Flash Sale: Aer Lingus is selling Avios with a 50% bonus... 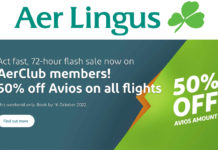 How to transfer Avios between Aer Lingus & British Airways (A... Why you shouldn’t book Aer Lingus awards through British Airways