Issues that British Airways is currently having with the Rolls Royce engines on a number of its Dreamliners have seen the UK’s flag carrier wetlease a number of Qatar Airways A330 aircraft to cover certain routes while BA’s aircraft are out of action.

Ordinarily the news that Qatar Airways will be operating some British Airways flights would be a reason to cheer but for some passengers this has created issues.

It’s not all bad news because, as I explained a few days ago, British Airways is giving passengers a number of options if they’re affected by the aircraft changes.

Passengers can get full refunds, choose to take different flights or to cash their tickets in for flights on other British Airways routes. Importantly, some passengers who decide to accept a downgrade are being offered a partial refund and a goodwill gesture of cash/voucher or Avios (more on that via this link).

Now here’s the most important bit:

If British Airways downgrades a passenger’s class of service the airline is liable to offer passengers very specific reimbursement under EU regulation EC261/2004.

This is what that regulations says about downgrades:

“If an operating air carrier places a passenger in a class lower than that for which the ticket was purchased, it shall within seven days, by the means provided for in Article 7(3), reimburse:

(c) 75% of the price of the ticket for all flights not falling under (a) or (b), including flights between the European territory of the Member States and the French overseas departments.”

The three routes on which British Airways is downgrading passengers are all over 3,500km in distance and therefore paragraph (c) is the relevant one here.

Passengers downgraded on flights booked on BA that are now being operated by Qatar Airways are entitled to a reimbursement equal to 75% of the cost of the ticket.

From what I’ve read this is not something that BA has to pay on top of whatever fare difference they’re offering (that would be incredibly generous) but it’s the minimum that BA has to pay to passengers who are downgraded to a cabin below the one they originally booked.

Bear in mind that the goodwill gestures that BA is offering right now have nothing to do with any reimbursement due under EC 261/2004. So, regardless of what goodwill gesture a passenger receives, BA still also has to reimburse the downgraded passenger at least 75% of his/her original fare.

If you’re a First Class flyer who has just been downgraded you’re in a very nice position  – 75% of your fare is due back to you under EC 261/2004, BA is offering you £1,400 or 280,000 Avios as a goodwill gesture and you still get to fly to your destination in a reasonable Business Class cabin. Nice work! 🙂 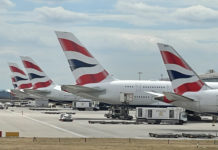