Delta is an airline I’m starting to pay a lot more attention to as I consider my options going forward. As someone who splits his time between LA and London Delta isn’t the most convenient airline for me to fly but it’s starting to feel like an airline that at least cares about offering service at a level I want (unlike United and American who appear fixated on their race to the bottom).

I’ll post more on my thoughts about booking with Delta in due course but today’s announcement that the airline will add yet more service to the LA area hasn’t done the airline any harm when it comes to earning my business.

From 8 July 2019 Delta will offer a 2x/day service between Hartsfield-Jackson Atlanta International Airport and Hollywood Burbank Airport on the following schedule:

With American Airlines probably Delta’s biggest competitor in the LA area (especially for the Hollywood dollars) it’s interesting to note that Delta’s press release makes a point of saying that its flights will offer “seat-back entertainment screens“.

American Airlines is in the process of ripping out seat-back screens on its aircraft in a move that, anecdotally, people don’t appear to appreciate.

In addition to seat-back entertainment screens Delta’s service to Burbank will offer the following:

*Delta offers complimentary snacks on every flight over 250 miles as well as a choice of Starbucks coffee, hot tea, a selection of sodas, juices and water.

The Main Cabin seats look very tight for a 4.5 hour flight like this one (30″-31″ of legroom and just 17″ of seat width) so I’d probably do my best to avoid these if at all possible….especially on the red-eye.

The Delta Comfort+ seats have much better legroom (34″) but offer the same width as the Main Cabin seats (17″)…..so they’re better but only along one axis. Still, these should be fine for a 4.5 hour flight as long as you (or your seat mates) aren’t too broad.

The First Class seats are clearly the place to be if you can afford it (37″ of legroom and 21″ of seat width) but with just 12 of these in the aircraft they may be hard to come by if you’re hoping for upgrades or looking to use miles to book your trip.

Overall it’s great to see Delta add more flight to the LA area – I’m a big fan of competition and a big fan of seeing more flights to/from the LA area from airlines that seem to make an effort to deliver good customer service so that’s two check marks from me. 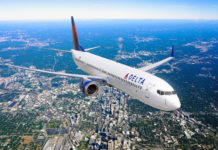