If you’re booked to fly with Virgin Atlantic to Los Angeles this December it may be time to check your seat reservations, and if you’re considering booking Virgin Atlantic Business Class for travel to/from Los Angeles in December, it may be time to consider other options because the airline will not be flying its A350 to LAX for a period of 31 days.

The introduction of the Airbus A350-1000 into its fleet has been a big deal for Virgin Atlantic because not only is the aircraft considerably more economical than the aircraft it has been replacing, but it has also finally allowed Virgin to offer a truly competitive Business Class product on some of the most lucrative routes in the world.

One of those lucrative routes is the airline’s London – Los Angeles route but for reasons that remain unclear, not only has Virgin Atlantic reduced the number of weekly flights that it will offer to/from Los Angeles in December, but it has also withdrawn the A350 from service during the same period.

Between 1 and 31 December, however, things look a little different:

Not only do we lose 3 weekly flights, but we see a few timing changes and the withdrawal of the A350-1000.

The losers here are anyone who wanted to catch the late flights out of London or LA on a Tuesday, Wednesday, or Thursday, and anyone who is booked into Virgin’s Business Class cabin.

The Dreamliner may have more spacious Premium Economy seats than the A350, but the biggest difference between what these two aircraft offer is to be found in the frontmost cabin. Up front, in ‘Upper Class’, the Dreamliner offers a claustrophobic abomination that reminds me of horse stalls on a racetrack… 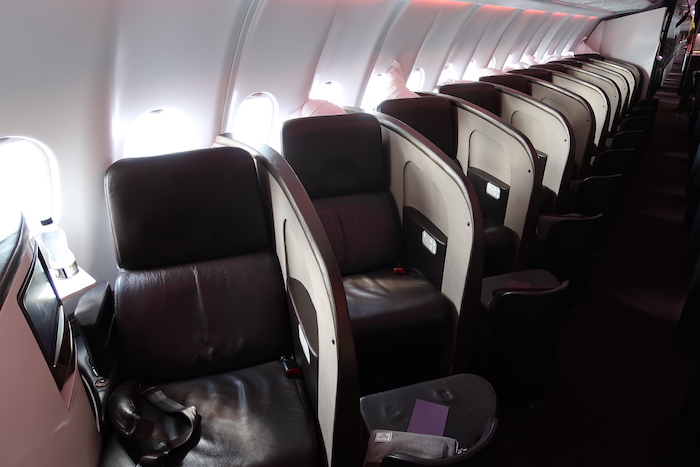 …while the Airbus A350-1000 offers the airlines new(ish) Upper Class ‘suites’ which are so much better that I’m struggling to find a word to describe the gap between the two offerings.

You’ll get the same great Virgin Atlantic service in both cabins, but while I will actively seek out the new Upper Class suite when considering my transatlantic options, I will actively avoid flying Business Class in Virgin’s Dreamliners.

Virgin Atlantic will be flying fewer weekly flights between London and Los Angeles in December and during the same timeframe, it will also not be offering its best Business Class product on the route either. Fortunately, everything returns to normal from 1 January 2022 but for one month only, Virgin Atlantic becomes an airline to avoid if you’re booking Business Class to/from Los Angeles.

Previous articleNo, the Capital One Venture X Card is not a ‘Sapphire Reserve killer’
Next articleAir France introduces a new route between the US and the Caribbean