Qantas and American Airlines recently had their price-fixing enterprise joint venture partnership rubber-stamped by the US Department of Transport and now it’s time for the airlines to start keeping some of the promises they made when they begged the DoT to let them collude at the expense of the flying public.

Within the joint submission to the DoT were proposals for routes that Qantas and American Airlines said they would be able to operate should the department look favorably upon their application and, as of yesterday, Qantas has started selling tickets on two of these routes. From 9 February 2020 Qantas will fly a Boeing 787-9 between Brisbane and San Francisco on the following schedule:

With the airline also offering service to San Francisco from Melbourne and Sydney, the Bay area will be well served by Qantas but it’s important to note that this isn’t actually a real service increase to the US.

Qantas and American Airlines may be able to legitimately claim this as a “new route” for the partnership, but the reality of the situation is that the Dreamliner which will be operating these flights is being taken off the Brisbane – Los Angeles route. From 20 April 2020 Qantas will start up its second-longest route (~8,901 miles) when it launches flights between Brisbane and Chicago O’Hare on the following schedule:

Per Qantas, the new route will take approximately 16 hours and 20 but that will vary depending on the winds on the day.

As with the new route to San Francisco, Chicago will be getting service from a Qantas 787-9 Dreamliner and the flight numbers have been chosen to “[pay] homage to the 1985 Chicago Bears football team, winners of the 1986 Superbowl and widely regarded as one of the best teams in history”.

As a Bears fan, I appreciate the sentiment 🙂

Note: Qantas also flys QF49 to San Francisco in tribute to the 49ers.

While the new route to Chicago is a genuine increase in service between Australia and the US, the new route to San Francisco is really no more than Qantas redeploying its aircraft so I’m struggling to get overly excited about the latter.

The new service to the Windy City service will be a nice option for Business Class flyers out of Chicago (the Dreamliner has a great Business Class cabin) but I have to question the sanity of anyone who willingly spends 16 – 17 hours without a break in an Economy Class seat that’s just 17” wide…as that’s exactly what the Qantas Dreamliner offers. 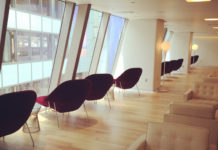