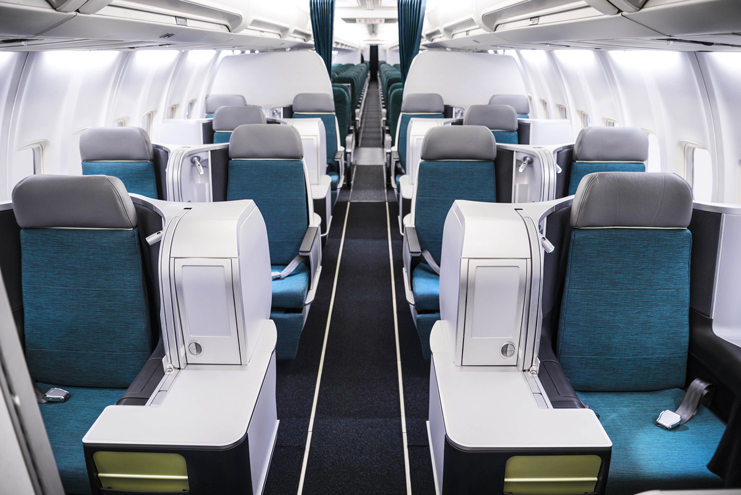 Aer Lingus is becoming an increasingly more important transatlantic carrier as it expands its routes, updates its aircraft & cabins and eventually joins the oneworld alliance.

The airline recently announced a big rebranding which will see its aircraft in a new livery and its crews in new uniforms but the more interesting recent development (for passengers) was the announcement that Aer Lingus would offer lie-flat Business Class seats on select short-haul routes.

Aer Lingus is set to take delivery of a number of Airbus A321 Longer-Range aircraft from June this year and the airline will be operating these on select routes between Ireland and the United States.

So far we have only been able to speculate as to what seats we’ll see on these Aer Lingus A321LR aircraft but now Australian Business Traveller claims to have the definitive answer.

Per an internal memo that AUBT say it has seen Aer Lingus will continue to offer the Thompson Aero Vantage seat in A321LR just as it does in its Airbus A330s and Boeing 757 aircraft. As is usually the case with aircraft cabins that feature this style of layout the better seats will almost certainly be the “throne” (solo) seats that offer a lot of privacy and storage space.

The pairs of seat found in every-other-row should also be fine and should appeal to couples traveling together and, if you happen to be a solo traveler with no option of selecting a throne seat, the divider between the two seats should provide ample privacy if you don’t know the person seated next to you.

Aer Lingus will be taking delivery of 14 Airbus A321LR aircraft in total and the first is expected to be delivered in June. By the end of 2019 the airline should have a total of four of these aircraft in its fleet and I expect to see the first Aer Lingus A321LR scheduled to fly transatlantic from August at the latest.

The A321LR has a range of around 4,600 miles so Aer Lingus could comfortably fly this aircraft on most of its routes to North America out of its Dublin home.

LA, Seattle and San Francisco are all out of reach but I fully expect to see the A321LR scheduled to fly to destinations like Washington D.C., Hartford, Philadelphia and Minneapolis (when that route launches later this year) and even possibly to super-popular destinations like Boston and New York at times when loads are lower.