Home Airlines TAP Air Portugal Will Fly Its A321 LR To Washington D.C. Yesterday I wrote about TAP Air Portugal scheduling its soon-to-be-delivered Airbus A321neo LR on its Porto – Newark route from June this year and now the airline has added its new aircraft to another of its East Coast destinations – this time it’s Washington D.C.

From 16 June 2019 TAP Air Portugal will be adding Washington D.C. to the list of US cities it serves out of its Lisbon home as it commences a 5x/week schedule which is currently set to run for the rest of the year.

For the first few months of service TAP’s Lisbon – DC route will be served by one of the airlines A330-200 aircraft which, if the seat plans are to be believed, will offer one of TAP’s newer Business Class cabins From 2 October, however, the route will be taken over by TAP’s new narrow-body Airbus A321neo LR aircraft…. 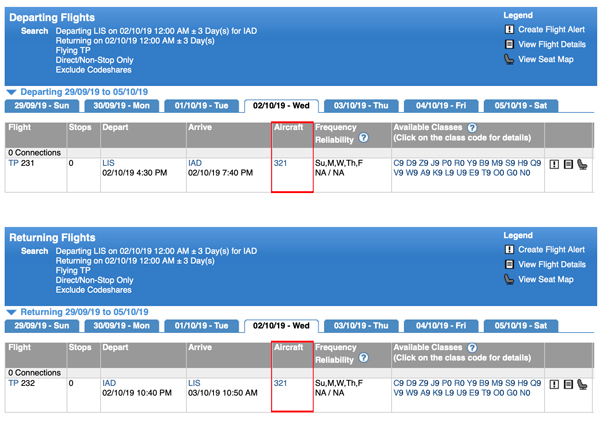 ….which will offer a similar but smaller Business Class cabin….

..and a much smaller Economy Class cabin.

Based on a seat count from ExpertFlyer this is how the numbers look:

Considering the frequencies on the route aren’t increasing that’s quite a decrease in the number of seats that will be on offer from October but presumably TAP has a better use in mind for its A330-200.

Note: If you read the article on the TAP A321neo yesterday this will look very, very familiar 🙂

I haven’t found any images of the TAP A321neo LR Business Class Cabin so far but based on the ExpertFlyer seat map it looks like it will be very similar to what you’ll find on the Aer Lingus 757s…..

JetBlue offers door on its solo/throne seats which TAP almost certainly will not but, essentially, we should see something very similar when we get our first look inside the TAP Air Portugal A321neo LR.

The TAP Air Portugal A321neo LR is only being fitted with 168 seats in total so the Economy Class cabin will offer just 152 seats….and that’s not a lot of seats for an aircraft of this size. The reason for this is that the front 5 rows of the A321’s Economy Class cabin will be designated as “Preferred Seats” and will almost certainly offer 34″ of legroom (more in the exit row) as compared to the 31″ of legroom found in the regular Economy Class section. These will be free to select for select status holders but will come at a price for all other flyers.

If, as it would appear, the A330-200 which will launch TAP’s service to Washington will offer the airline’s newer Business Class cabin the introduction of the A321 on this route is bad news.

The A321 has smaller cabins and, being a narrow-body aircraft, will feel a lot more confining and claustrophobic than the wide-body A330 (regardless of which cabin you’re booked into)….and the Business Class cabin will offer fewer seats with direct access to the aisle.

It’s not surprising to see TAP roster its A321neo LR’s on the Washington DC route as this is exactly the kind of route the aircraft was designed to fly, and it’s only a matter of time before Boston sees its TAP service reduced to a A321neo LR too.