Virgin Atlantic has now launched its winter sale for departures from the UK and there are a few deals available which are worth investigating if you’re looking to fly across the Atlantic to the US or the Caribbean or if you’re looking for flights to select cities in Asia and South Africa.

Full T&Cs are available on the Virgin Atlantic sale page

Out of this set of fares the Hong Kong fare should be dismissed out of hand (it’s a terrible “deal”) but the fares to Johannesburg and the Caribbean aren’t too bad for departures from the UK.

If I wanted to fly to the West Coast I’d be tempted to fly into (and out of) Seattle rather than San Francisco and to take a short internal flight to my final destination – I suspect you could save around £200 per person by doing that.

This is where the real value is to be had in this sale as Virgin Atlantic offers one of the best Premium Economy seats across the Atlantic. 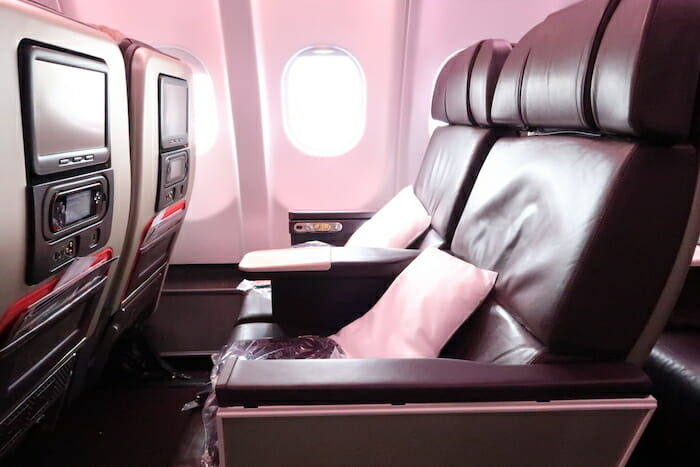 With seats offering a fantastic 21″ of seat width and a good 38″ of seat pitch on almost all of its aircraft Virgin Premium Economy is a very good half-way house between Economy and Upper Class…and that’s a big reason why I like some of these fares.

If I was looking for ideas for my next trip I’d definitely be considering these fares and checking the dates on which they’re available.

There are two key things to point out here:

Firstly, the lowest fares being quoted on these route are for hand baggage only fares so the prices will be higher if you need to place any luggage in the hold. Here’s what the various Economy Class fares to LA look like:

As you can see the fare which includes a checked bag costs £100 more than the advertised sale price.

This may still work for you but I suggest checking what fares other airlines are offering (airline like Norwegian for example) before jumping on these Economy Class fares.

Secondly, the prices being advertised by Virgin Atlantic on its sale page aren’t necessarily the cheapest prices the airline is offering.

The sale page shows is advertising Economy fares to Barbados “from £432” while the fares on the first set of dates I selected started at around £372.

The sweet spots in this sale looks to be among the Premium Economy fares although a few of the Economy Class fares may be of use if you can travel with hand baggage only.

I’m struggling to get excited about the Upper Class fares in this sale as (a) I don’t think much of the current Virgin Atlantic Business Class cabins and (b) I’ve seen better deals from BA and considerably better deals from TAP (if you’re prepared to have a layover).

Lastly, don’t forget that Virgin Atlantic will be unveiling new Upper Class and Premium Economy products in the second half of 2019 so there’s a very good chance that some of these fares are for routes on which the new cabins will debut.

Has anyone else spotted any deals that look tempting?