Good To Know: Hyatt Will Give You 1.54 Cents In Value Per World Of Hyatt Point Back in December 2019, Hyatt announced that it would be introducing peak and off-peak pricing to the World of Hyatt program but alongside that news, the hotelier made a further announcement that got a little lost among the noise generated by the award chart devaluation and the pandemic that followed shortly thereafter.

This second announcement was actually very good news for World of Hyatt members as it was the announcement that told us that Hyatt was significantly improving the value proposition of redeeming points for onsite credit. In fact, the improvement was so good that since January 2020, World of Hyatt points have offered a better onsite redemption rate than any other hotel currency.

Take a look at this chart: This is the chart that shows how much on-site credit (for dining, spa treatments, parking, transportation, and more) Hyatt will give World of Hyatt members in exchange for their hard-earned points, and while at the low end the offer is poor, at the high end things get considerably more interesting.

Redemptions of 20,000 points or less are poor value and should be ignored by just about everyone who doesn’t have more points than they can possibly use, but the value offered for redemptions of 35,000 and 65,000 points shouldn’t be ignored.

Sure, unless you’re staying at a resort with your family for at least a week or staying at a property with a Michelin-starred restaurant (like the Park Hyatt Paris-Vendôme), most people will probably struggle to spend $1,000 in on-site credits during a stay (although some people won’t find this challenging at all), so claiming that World of Hyatt points are worth “at least” 1.54 cents is probably a stretch.

But spending $500 on food, spa treatments, and parking at a variety of Hyatt properties (e.g. the Andaz Maui) isn’t much of a challenge at all for those who like to eat on-site and get a little pampering (one visit to the spa can easily take care of $500). That makes it considerably less of a stretch to claim that World of Hyatt points are worth at least 1.43 cents each.

I’m not suggesting that World of Hyatt members should be looking to use their points for on-site redemptions every time they stay at a Hyatt property (you should be able to do better than 1.43/1.54 cents point when you book award nights), but its an option that’s worth keeping in mind.

Did you know about this redemption option and would you consider using it? 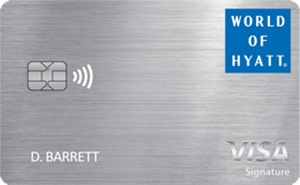